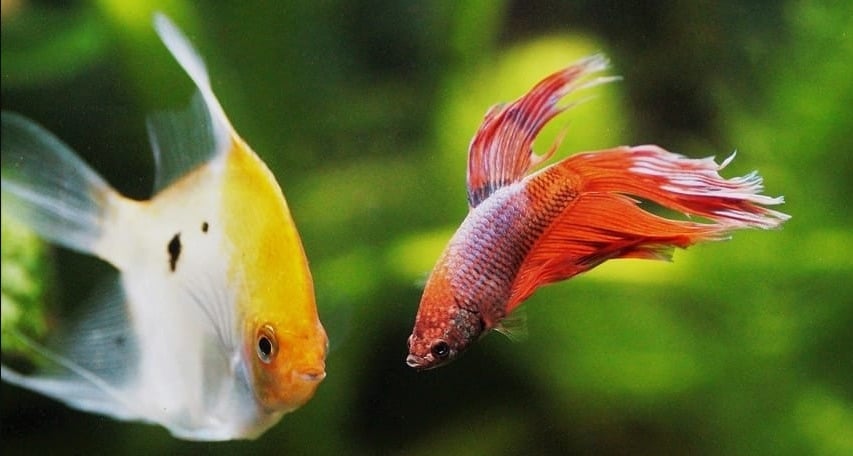 Betta fish are household pets that can be loved by all ages. Some betta owners will own multiple tanks for their fish to live in, while others may only have one tank. But what happens when you want to introduce a second type of pet into your home? For example, an angelfish. Can they live together peacefully? Let’s find out!

Can Betta Fish Live with Angelfish?

Yes, betta fish can live with angelfish. They may not be the best of friends, but they will get along as long as their tank is large enough, set up properly, and maintained frequently.

It’s important that you monitor your betta fish and angelfish at all times to ensure that they are happy and their needs are being met. This will require more work on your part, but it will be worth it to see the two fish peacefully coexisting in one tank.

Both fish are known to be territorial, so it’s important that you provide them with plenty of hiding places in the tank. You may also want to consider adding some decorations, such as plants, to help create more territory for each fish.

If you’re not sure that you can handle having both types of fish in one tank, it might be best to choose just one or the other. But if you’re up for the challenge, go ahead and give it a try!

The Gender Of Your Betta & Angelfish

Keep in mind that if you have a male betta fish, he may become territorial and aggressive toward your angelfish. Female betta fish are less likely to react this way, but they may still become nippy if you introduce a new fish into their home.

You should also consider whether your angelfish is male or female (the males are more aggressive than the females). As such, it may not be such a good idea to keep a male betta with a male angelfish.

How Many Bettas Can I Keep With My Angelfish?

Ideally, the number of bettas should not exceed the number of angels in the tank. If there are more bettas, they will most likely start to fight for dominance.

I would 2-4 angelfish for every 1 betta fish that you own. This will help to keep the peace and reduce the chances of any fights breaking out.

Keeping one angelfish with one betta fish is a bad idea as the betta will fight for dominance. It will likely see the single angelfish as an enemy and will not hesitate to attack.

Betta fish are carnivores that will eat any fry in the tank. This means that baby angelfish fry will most likely be eaten if they are in a betta fish’s aquarium (even after several months, once the fry has grown).

But not all is lost! You can put small angelfish into another tank to raise them before introducing them back into your main aquascape.

My Angelfish Are Eating My Bettas Food

This becomes a problem because your angelfish will eat all of the food before your betta gets any.

You can try switching up their feeding schedule so that they are eating at different times throughout the day/night cycle. This way, your angelfish will eat first and leave some food for the bettas.

You can also create lots of hiding places in your tank, and then feed your betta when the angelfish aren’t looking! This will help to ensure that your betta gets the food it needs.

Yes, angelfish can eat betta fish food. In fact, they will enjoy it and it is a good way to ensure that they are getting the nutrients they need.

You should also feed both fish live foods like bloodworms or daphnia to give them some variety in their diet. They will enjoy chasing and hunting for these treats and it will keep them happy, healthy, and active.

The only time to avoid live foods is if the angle fish and betta fish become competitive and start to fight each other.

How Do I Introduce My Betta to Angelfish?

The best way to introduce your betta fish to angelfish is by adding the new fish slowly. Start by adding a single angelfish into the tank and then wait a few days before adding any more. This will give your betta time to get used to the new addition and will help to avoid any fights from breaking out.

It’s also a good idea to use a quarantine tank for any new fish that you introduce into your aquarium. This way, the new fish can be monitored for any signs of illness or disease before being added to the main tank with other fish that are already living there.

The last thing you want is to make your betta sick! After adding the angelfish to your main tank, keep an eye on them for a few weeks. If you notice any fin-nipping or other signs of aggression between the two species, take action before things get out of hand.

My Angelfish Is Nipping My Betta

It is possible that your angelfish may decide to nip at the betta fish. This can be due to a number of reasons, such as:

The angelfish just doesn’t like its tank mate and has decided that some aggression is necessary (most likely happens with new introductions).

There isn’t enough food for both of the fish species. Make sure to introduce a variety of foods, and make sure that you are feeding them at different times throughout the day/night cycle so that everyone gets their share!

The tank is too small for two large species like angelfish and betta fish (this can cause some stress which could lead to aggression).

The angelfish is simply too young for the betta fish (the younger fish are less experienced and may get over-excited or aggressive with larger tank mates).

If you notice any nipping, take action. Separate your fish into different tanks so that they can each have their own space to swim in without getting stressed out.

What Tank Do I Keep Angelfish and Bettas In?

It is important to keep the size of your tank in mind when deciding whether to keep betta fish and angelfish together. The minimum size of the tank depends on how many fish you own, but I would start with a 20-gallon tank.

This size aquarium tank will give your fish plenty of space to swim around and will help to reduce the chances of any fights breaking out. The tank should also be decorated with lots of plants and hiding places to make the fish feel comfortable.

You may even need to upgrade the size of your tank in the future. Angelfish may start small but they can grow to eight inches in length, which is larger than the average betta fish. If you find that your tank is too small to accommodate both species, then you will need to upgrade your current tank or separate them into different tanks.

I recommend using marimo moss balls and some driftwood, which will help to make the tank feel at home. The more natural it feels, the better! You can read more about moss balls in this article:

What Else Should I Consider?

Keeping multiple types of fish together isn’t as easy as it seems, and you need to take a number of things into account before making your decision.

You should always research the different fish species that you are considering keeping together and make sure that they are compatible. Some fish may get along well, while others may not be so tolerant of one another.

You will need to keep a closer eye on what’s happening in your tank if you have multiple types of fish, as fights can break out at any time. Signs to look out for include fin-nipping, chasing, and flared fins.

In conclusion, you can keep betta fish and angelfish together in the same tank as long as you are willing to put in the extra work to make sure they are getting along. If you have a male betta, it is best not to introduce him to a male angelfish, as this could lead to fights.

The most important thing to remember is to use a tank that is big enough for both fish and to keep an eye on them for any signs of aggression. For example, I wouldn’t recommend keeping multiple fish together in a small tank of 5-gallons.

Just because you CAN keep angelfish and bettas in the same tank, it doesn’t mean that you SHOULD. Both fish can be aggressive, so you may be fighting a losing battle, especially if both fish are males. You may want to keep your betta with tetras instead.

I hope that you have enjoyed this article and that it has been helpful for those of you who are looking to introduce betta fish into an aquarium with angelfish.