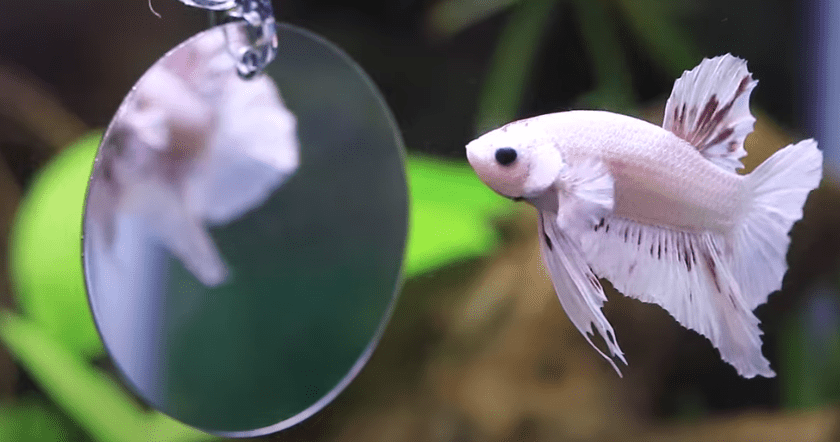 Many people who keep betta fish in their homes have wondered at some point if mirrors are bad for them. Some people believe that the fish can see their own reflections and become stressed out or even go into a coma. In this blog post, we will explore the truth about whether mirrors are bad for betta fish or not.

Are Mirrors Bad for Betta Fish?

No, mirrors are not bad for betta fish. In fact, many betta fish owners use mirrors to help their fish get exercise and some extra stimulation from their environment.

Some people believe that betta fish become stressed out when they see their own reflections in a mirror. However, this is only if you leave the mirror in the fish’s tank for long periods of time without giving the fish a break from it.

If you introduce the mirror to the fish’s environment for only a few minutes each day, the fish will not become stressed out.

When placed in the tank, the mirror can reflect the betta’s own image back to him. The betta will then think that there is another fish in the tank and will start to flare his fins and swim around. This is a great way to get your betta fish some exercise without having to buy another fish.

If you do decide to use a mirror with your betta fish, make sure that it is not placed in the tank for more than a few minutes at a time. This is because the constant reflection can be stressful for the fish and can cause him to become sick.

Benefits of Mirrors for Betta Fish

We’ve already established that mirrors are not bad for betta fish, but what are some of the other benefits?

Betta fish are territorial by nature and love to build bubble nests. When a betta sees his reflection in the mirror, he will often mistake it for another betta and start to build a bubble nest.

He’s doing this to compete with the other betta and to show off his dominance. This is a great way to get your betta to build a bubble nest if he’s not doing it on his own.

Bubble nests are important because they provide a place for the female betta to lay her eggs. If you’re planning on breeding your bettas, then mirrors can be a great way to get the male to build a nest.

Many betta fish become bored easily and can start to display negative behaviors as a result. If your betta is starting to get bored, then placing a mirror in his tank can help relieve some of that boredom.

The mirror will provide your betta with something new to look at and explore. He may even start to play with his reflection, which is a great way to relieve boredom.

Some betta fish owners use mirrors to create the illusion of two bettas. This means you can avoid the hassle of having to care for two fish, but your betta will still get all the benefits of having a companion.

If you place a mirror in your betta’s tank, he will start to interact with his reflection as if it were another betta. He will flare his fins, build bubble nests, and even chase after his reflection.

Betta fish can sometimes become constipated, which can be dangerous for their health. Flaring can help relieve constipation in bettas by massaging their intestines and helping them to poop.

What Happens When You Place a Mirror in Betta Tank?

When you place a mirror in the betta fish tank, the betta will see its own reflection and become stimulated. The fish will start to flare its fins and swim around, which is a great exercise for your fish.

Your betta will think another fish is in its territory and flare its fins as a way to intimidate the other fish. This is great for mimicking the betta’s natural habitat and helps the fish stay healthy and active.

Removing the mirror will make your betta believe that he was strong enough to intimidate the other fish and he will become more confident. This all relies on the mirror only being in the water for a maximum of a few minutes.

How Long to Keep Mirror in Betta Tank?

Mirrors should only be placed in the betta tank for a few minutes at a time. This is because the constant reflection can be stressful for the fish and can cause him to become sick.

While mirrors aren’t bad for betta fish, this is only when they are used in moderation. Constantly having a mirror in their tank is a huge no-no and can cause your fish a great deal of stress.

In conclusion, mirrors are not bad for betta fish. If used correctly, they can actually provide some benefits for the fish. Just make sure that you do not leave the mirror in the tank for too long and that you give the fish a break from it every few hours.

Have you ever used a mirror with your betta fish? Let us know in the comments below!