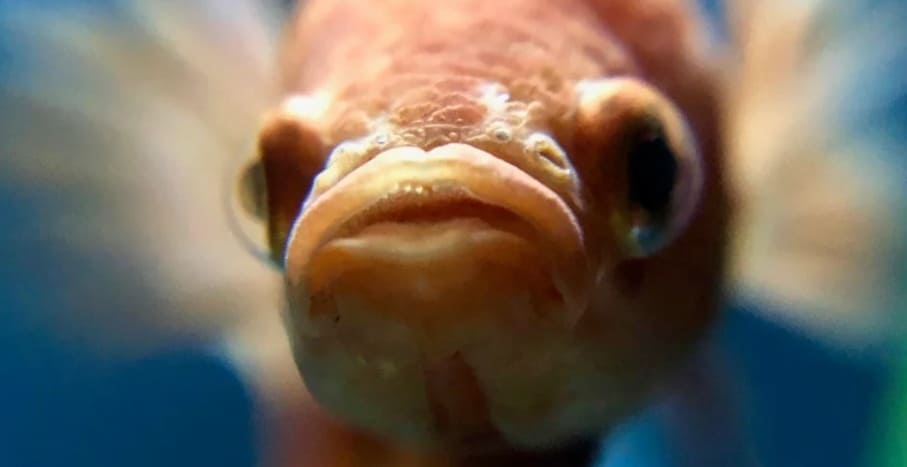 Bettas are known for their bright colors and usually large, flowing fins. They can also be found in a variety of shapes and sizes. But what is less well-known about these fish is how they eat.

One question that often arises from those who own or care for bettas is “do bettas have teeth?” To answer this question we need to understand the anatomy of the mouth and jaws of a betta fish. Let’s jump in!

Do Bettas Have Teeth?

Yes, betta fish have small, white teeth that are used for gripping prey. The teeth are located in both the upper and lower jaw, which are helpful for catching food as it passes by.

When you see how betta fish rip their food apart, it can be easy to understand how they have teeth. As carnivores, they wouldn’t be able to catch and eat prey without these sharp teeth.

What Do Bettas Use Their Teeth For?

There are two ways that betta fish use their teeth:

Bettas use their teeth for snapping up small insects and invertebrates when hunting. Because their prey is usually quite small, they need all the help they can get to catch it. The teeth grip the prey and keep it in place while the fish’s powerful jaw muscles clamp down and swallow it whole.

In captivity, these teeth are used for biting down on pellets or flakes that are offered as food. This helps the betta to break the food up into smaller pieces before swallowing, making it easier for them to eat.

In addition to helping them catch prey, betta fish use their teeth for fighting. When two males are competing for territory or a mate, they will often bite each other on the body or fins. This can cause serious damage and even death if the fight goes too far.

In fact, you may have heard bettas being described as Japanese fighting fish. This is because these fish have been bred for their aggressive nature and ability to fight.

As such, two males should never be kept together in the same tank. You can use a divided betta tank if you have an aggressive betta that is starting to bite other fish. This will allow you to keep the fish separate without having to rehome them completely.

Betta fish have a strong bite that hurts if they manage to clamp down on your finger. This is because their teeth are sharp and can easily pierce the skin.

While they may not be able to take down a full-grown animal, their bite is still quite powerful and should not be underestimated. It’s always important to be careful when handling bettas, especially if there are males in the tank that are feeling territorial.

Why Is My Betta Biting Me?

There are a few reasons why your betta fish might be biting you, but it’s mainly due to curiosity, defending territory, and accidents. Oh, and a bite doesn’t mean that your betta doesn’t love you!

When a betta fish bites you, it’s often just due to curiosity. Bettas are naturally curious animals and their inquisitive nature can cause them to investigate anything that stands out from the background of the tank.

Another reason why a betta might bite you is if it’s defending its territory. As we mentioned earlier, bettas are quite territorial and will fight for what they believe is their own.

Bettas are especially territorial when guarding a mate or egg clutch, but even if you’ve just introduced new fish into the tank your betta might be on guard to defend his home.

Many owners have reported being bitten by their bettas when they reach into the tank to clean it or adjust the decorations. This is because the betta sees your hand as an intruder and tries to bite it in order to scare it away.

Finally, an accidental bite can occur if it’s feeding time and you get too close to the tank. Bettas tend to be quite aggressive when it comes to food, and they will often lash out at their owner’s hands in an attempt to catch a snack.

This doesn’t necessarily mean that your betta is trying to bite you; rather, it just means that he thinks you’re offering him food and wants some!

How Can I Stop My Betta Fish From Biting?

If you want to stop your betta fish from biting, then the best thing is to understand why he’s doing it in the first place. As we’ve mentioned above, there are a few reasons for this behavior and each one will require something slightly different. If you do a bit of research into your betta’s personality and behavior, you’ll be able to better deal with any biting issues.

If your betta is biting due to curiosity, then you can try to increase the amount of stimulation in the tank. This will keep your betta busy and stop him from having to bite your finger. If you’re using live plants, then try moving them around every once in a while so that your betta has something different to explore.

If your betta is biting due to defending territory or being territorial when feeding time comes around, then the best way of dealing with this behavior is simply not to trigger it. While you can’t always stop your betta from feeding, you can make sure that he doesn’t see your hand as a threat by keeping it out of sight when possible.

Nothing can stop biting accidents, so the best thing to do is just reduce the amount of time you have your hand in the water.

Biting isn’t a huge problem for most bettas, but it can be very annoying if you’re trying to interact with them or just clean the tank! It doesn’t hurt too much, but it’s still best to be careful.

Do Betta Fish Bite During Spawning?

Yes, betta fish can bite each other during spawning. They aren’t the best lovers, but they still have their own complex mating rituals, which usually involve biting.

Mating – Gentle biting during mating is to be expected. In fact, it can be a good sign if the fish getting bitten doesn’t seem to mind. This means that the fish is getting ready to mate.

Fighting – On the other hand, if there is no mating behavior to be seen and the fish are fighting, then it’s time for you to get involved. Separate the bettas immediately! You can use a divided betta tank to do this.

In conclusion, betta fish have teeth that they use to bite for several reasons. While it’s not a common occurrence, it’s still best to be aware of the possibilities and take steps to prevent your betta from biting.

Now that you know a bit more about betta fish teeth, you can see how they play an important role in their everyday lives. Not only do they help with feeding, but they can also be used in fights to defend territory or mates.

I hope that you found this article useful and that it will help you understand your betta fish a little better!